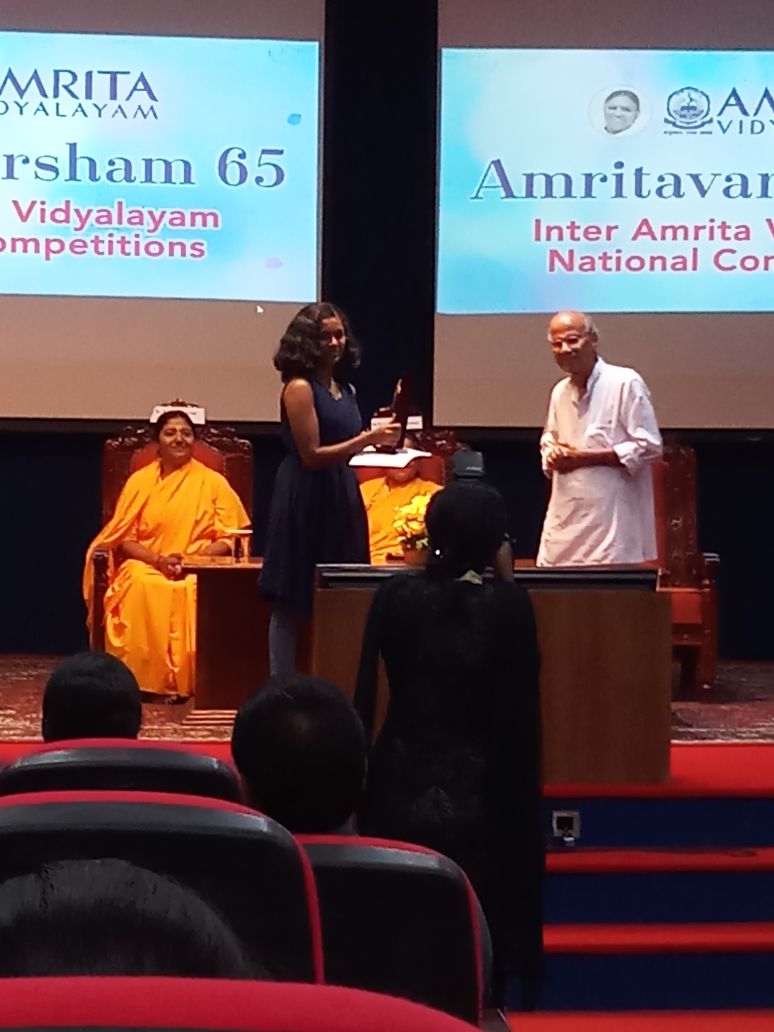 It was a Monday morning. Everything was as usual. The murmurings of my friends were falling deep into my ears. As I sat in my class listening to the lectures of our teacher, I could see another teacher moving towards our class. I noticed a set of papers in her hand and I was sure that her arrival was either to convey some important message from the principal or to select students for some programme/competition and I did not go wrong. There she was asking “Who would like to participate in the elocution competition to be held at Amritapuri as part of Amma’s birthday celebrations, representing our school?” Only two hands rose up and my hands remained tightly clutched to the edges of my desk. The hands that usually rose up involuntarily at the news of any competition, remained still where they  were. Maybe this act of mine surprised my teacher that she continuously insisted me to take part in the competition and emphasised the fact that it was a national level competition, a wonderful opportunity and exposure. I listed all the reasons before her for not participating in the competition. I was then in 10th std and I had already lost some important working days on account of training for Sahodaya Badminton Championships.

Like every other student facing board exams for the first time, I was also concerned about missing some important classes. I thought my teacher would pay heed to my words and would exempt me from participating in the competition.

Only one student could represent our school at Amritapuri. So it was necessary to conduct a selection programme. It was now pretty much sure to me that I’d no longer be asked to participate in the competition and was quite happy at the fact that I did not have to dissipate my time for preparing the speech.

One fine afternoon, I was called in by my teacher and was asked to take part in the selection competition that was to be held then and there. I was thunderstruck and kept gaping for sometime,till someone came and pushed my lower jaw up. I was in the most unenviable situation as all came prepared and I was not informed of this. I pleaded and implored, but all in vain. I could hear my heart pounding and I was panting as if I ran a marathon. I was left with no choice.I got merely fifteen minutes to prepare.

The next day we were informed that I along with two others were selected and it was still no time to relax. We had to undergo another selection procedure.

This time we had to prepare a speech based on Amma’s keynote address at the United Nations Organisation on ‘Reconciling Ancient Spiritual Wisdom and Modern Technology for Societal Transformation’. Finally I was selected to represent our school at the competition. By now I got somewhat chummy with the idea of taking part in the competition.

But obstacles kept coming on my way. What I heard was true…….the Arts day celebrations at school was decided to be held on the same day of my elocution competition at Amritapuri. I desperately wanted to take part in school Arts day celebrations. I brought the matter to the attention of the concerned teachers and could infer that the arts day celebration was planned to be conducted in such a way that the clash of events could be avoided.

It was on a friday evening that I and my parents boarded the train to Kollam. The rythmic movements of the train induced drowsiness in me and I felt quite cozy before I heard my mom’s phone ringing. I could easily sense the change in her voice as the conversation progressed. She told me in a disappointed tone that it was someone from school who called in to say that the school decided to conduct the off stage items the next day itself. It was a bolt from the blue. I was in complete shambles and burst into tears. I couldn’t help crying. My parents tried to console me. All the strange eyes that were glued to their smartphones suddenly turned to me. They gazed at me as if I were a weird creature. Seeing me in tears a stranger enquired what the matter was and tried to console me. He told me that I resembled his daughter and I did not in the least believe that it could be true until he showed his daughter’s photograph. He took a selfie with us so that he could show my photograph to his daughter. All those consoling could not pacify me.I was still perturbed. Meanwhile, in my eagerness, I rang up the principal of our school and learnt that the off stage items in which I was a participant would be conducted only after my return. I gave a sigh of relief. My joy knew no bounds. I could hear someone reciting ‘Tonight I can sing the saddest lines’. But I thought  otherwise, ‘Tonight I can sing the happiest lines’. All these may seem silly to the grown ups. But from a child’s perspective these were not mere ‘petty things’.

It was almost 4:00 am when we reached Amritapuri. We were ushered in with such hospitality that we would not normally expect. We were provided with a room and I crawled in the bed at the thought of waking up when the sun rises. But suddenly I heard a thundering voice from the other room. It was the boy next door practising for the elocution competition. In between I could hear his mother correcting him, “you must say like this…..” And apt came the reply from the boy that made me laugh my head off – “instead of me, you yourself go and present the speech.”

The caressing arms of sleep mercilessly dropped me down thanks to the family squabbles next door. The sun’s rays peeped through the window panes. As the beaming early morning light extended its lure over me, I couldn’t help running towards the window to get a glimpse of the aesthetic beauty of Amritapuri (Our room was on the fifth floor). I was enthralled and overwhelmed by its profound beauty. I felt so close to nature. It was so refreshing that it began to touch the deeper fibres of my inner being. It was such a surreal feeling of transcendence. As we came out of our rooms, I could see people from different parts of the world thronging towards the meditation hall. The cool air coming from the see nearby  and the chanting of mantras reverberating in and around Amritapuri created an ambience of spirituality and serenity which I haven’t hitherto experienced.

When I reached the venue, people had already assembled there. Soon the competition began. It was a tough one as the competition was among the selected few. Although I was satisfied with my performance, no speech looked banal.

At noon we had a sumptuous and palatable meal provided free of cost. Small wonder I devoured every bit of it.

We then assembled in a hall awaiting the declaration of the results. And there came a sagacious looking Brahmacharini with a piece of paper in her hand. She was about to declare the results and there was pin drop silence. I came second and I felt exhilarated at the fact that I could grab a prize at the national level. In the evening we had Amma’s darshan. She congratulated me and I still cherish it. It was a blissful moment. By god’s grace I could come back triumphantly.

I could not have gone through all these experiences but for my teacher who compelled me to participate in the event. And the experience taught me a good lesson.

“OPPORTUNITIES ONLY KNOCK ONCE.THE NEXT ONE MAY BE BETTER OR WORSE, BUT NEVER THE SAME.”

Pinvazhikal is an attempt to retrace our steps back to our alma mater, Amrita Vidyalayam… to preserve our memories of that beautiful place before they are marred by the vagaries of time and adulthood… to reconcile who we dreamed of becoming with who we are now… to build a bridge between the past to the future through the present students… to give back to the place that has created an indelible impression on our character… to be close once again to our greatest well-wishers, our teachers.

Life is not all sunshine and roses.
Me and my homie having a discussion during pt period
'The Forest of Enchantments'
The seniormost batch of Amrita Vidyalayam Kuthuparamba
Year '03
We take death to reach a star